I initially published this on YouTube on May 14, 2020.  I will re-print it here.  My feelings have not changed.  I believe Tom Hanks and his wife Rita Wilson are frauds and shills for Corporate America.

So why am I going after Tom Hanks, America’s modern-day Jimmy Stewart, and all around nice guy?

Maybe all of the above.

So let’s dissect the Tom Hanks experience.  I tell you, I’ve gone through almost all the articles I can find about him regarding coronavirus.

Of course, to be fair, everyone knows that celebrities get pushed to the front of the line even though they say they don’t, especially when it comes to liver transplants.  It seems logical to me that celebrities would have instant access to COVID-19 tests the public can’t seem to get.

If he and his wife got the coronavirus in America when there were only 1,301 cases reported, that would be extraordinary again because that would yield a regular person to celebrity ratio of 1 to 650, still a pretty neat trick; but surely there were other celebrities by that time who had reported positive.

What this suggested to me at the time was that celebrities were being used as social influencers to sell the disease. I waited a week or two though to see what the ratios would be. I wasn’t disappointed. Two weeks later on 3/24/20 there were approximately 55,000 positive cases in the United States, and I could identify in the media at least 25 US celebrities.   This yields a  ratio of one celebrity for every 2,100 people.  I can tell you right now that there are not 50 national celebrities and big shots  in my 100,000 person town. How about yours?

Were celebrities being used to sell the disease?

Well, let’s go to my next point and look at Hanks’s own comments.

The following is from Trilby Beresford on 3/28/20 writing in The Hollywood Reporter.

A few comments are in order.  Number one, what would Tom Hanks know about flattening the curve? That doesn’t sound like a normal comment from a lay person.  Did Tom Hanks fully understand R0 values and epidemiology enough to naturally make that statement, or is that statement coming from a handler who told him to learn and speak his lines?

Number two, I don’t know about you, but it takes me a long time to pick up on slogans.  I usually have to hear things five or six times before I say to myself, “What are they saying?”  But here is Tom Hanks, right out of the gate, hitting all the buzz words, in perfect tune, and perfect pitch, as if he had been practicing them his whole life.  Sheltering in Place, Social Distancing, Flatten the curve.  It’s a catchy little tune, is it not?

You see, when the CIA, the thug agency of Corporate America, overthrew Arbenz in Guatemala they had a tough time selling their message to the people until they, the CIA, got smart and began working through the Catholic Church. Then it was much easier for the CIA to peddle its bullshit.

In the United States, Corporate America works directly through the celebrities who have been duped into thinking that one is being  patriotic by supporting the government’s nonsense which not surprisingly in an increasingly fascistic America fits precisely in line with Corporate America’s goals.

To begin with, why was he admitted to the hospital?  People are not ordinarily admitted unless they have symptoms that need to be treated. Why would you admit someone with no symptoms? When it comes to COVID-19 specifically, why would you jeopardize the existing hospital population who already is medically fragile?  Was Hanks diagnosed in the emergency room and then admitted? Was he admitted first only to have the diagnosis come down a day later?  At any rate, he would have to have symptoms. What were these symptoms?

His symptoms are conveniently vague.

Generally, fever is not a reason to admit someone.  Nor is fatigue.  If that were the case, our hospitals would be overrun.  There has to be something the hospital offers that an outpatient setting can not offer in order to warrant hospitalization.  This can be IV antibiotics, oxygen, a surgical procedure, a suspicion of imminent danger or death to name a few.

Was Tom Hanks feeling ill?  If he was, why would he get down on the floor and do exercises? I don’t think Tom Hanks is that stupid.  If he’s smart enough to learn all the right buzz phrases without help, he’s smart enough to not get down on the floor and do exercises.  So which is it?  And who in the hospital gets down on the floor and works out?  I’ve been in the hospital as a patient a few times; I’ve never viewed it as a Gold’s Gym.  Usually the mind is preoccupied on mortality.  Given that Hanks, at the minimum, knew he was being tested for COVID-19, and knew of the mortality that COVID-19 could bring, he should have been scared shitless.

Additionally, in my 40 years in medicine, I’ve never seen a patient EVER working out in a hospital room.

Maybe Tom Hanks is selling a fake story from top to bottom.

One of my staff said to me:  “I don’t think Tom Hanks would do that.”  I don’t know about that.  Tom Hanks has been the beneficiary of Hollywood’s largesse and Corporate America’s largesse for a long, long time. If they asked him to do something, it must be pretty important. He’s too smart to say no.

As a movie man, Hanks surely saw The Brotherhood of the Bell, no?  Nearly everybody our age has.   If so, he saw what happened to Glenn Ford when he refused a request from above.  Sure, the movie may be fiction, but the fictional movie came out of an author’s mind, an author, David Karp, who most likely was writing out of experience.

Was Hanks not aware of what happened to Cliff Robertson when he bucked the tide and reported David Begelman to the authorities for writing phony checks?  Did I forget the Dixie Chicks whose career stalled when they stood up to Bush and the Iraq war?

Okay, what else can we glean to tip the scales?

First, there are the symptoms Hanks doesn’t talk about.  Coronavirus is a respiratory virus.  While it is possible for a person to have fever and fatigue only, generally people develop cough, stuffy nose and even a sore throat.  The reason why we get fever and fatigue is because the virus has invaded the mucosa of the respiratory tract.  The invasion and subsequent disruption of that mucosal architecture then causes us to cough and blow the snot out of our noses.  If the virus invades the mucosa of the lower respiratory tract, we develop a bronchitic cough and possibly alveolar dysfunction which in turn causes shortness of breath.

Second, recurring fever and fatigue on exercise are symptoms, not diseases; they indicate pathology that takes time to go away.  If he was “wiped out” after a minimum amount of exercise, it suggests a pathology that would take a good amount of time to disappear; and the older you are, the longer it will take.

Four weeks won’t cut it.  Easy fatigue can be suggestive of some type of alveolar dysfunction.  Taking a safe bet that his heart was okay, and that he wasn’t anemic, the dysfunction would indicate COVID-19 as the cause – if he indeed did have it.  If he did, given what we know, a lengthy recovery of months would be in order with quite possibly residual irreversible damage.  In other words, he would still be short of breath on exertion.

Given that, let’s look at Mr. Hanks post COVID-19.

Well, there he is on Saturday night live on 4/11/20.  He looks chipper. He doesn’t get tired. He doesn’t miss a beat. His color looks great.  He doesn’t look like a man who had coronavirus only a month before.  Even with the regular influenza, I’m coughing for months.  No, my gut tells me that this is a man who wasn’t sick at all.

Then there is his wife who was apparently much sicker than he.  She was so bad off, the doctors evidently felt she needed chloroquine, a treatment he and she seemed to pooh pooh less than a month later when the elites decided that pooh poohing chloroquine treatment was in order.

Well, she improved pretty quickly also; she was able to rap within quarantine fairly well.  And she cut a new song, ”Where’s My Country Song,” that was released  on May 8th.  It seems fair that she produced this in late April or early May.  She’s in fine voice; actually, she has a lovely voice.  How likely is she to be in top form this quickly?  If you are sick enough to require chloroquine, you are pretty sick, my friend.  Six weeks of recuperation isn’t going to cut it.  Not only must your body recover, you have to train with your group to get your rhythm back. That takes time.

Here is a YouTube link to Rita Wilson singing while in quarantine:  https://youtu.be/ObKUJQxvG9c.

And here she sings her newest song, Where’s My Country Song:  https://youtu.be/xeNd3Jv1YRw.

My conclusion: Ms. Rita Wilson did not have COVID-19 either.

Now, what about the lab tests? Surely those should cinch the diagnosis, right?

Not in my book.

The basis behind these lab results being supreme is that since these tests are run by a machine, anyone in the world who runs these tests would get the same results.  The problem with that argument is that imperfect and corruptible human beings run the machines.  Ergo, lab tests are not necessarily objective; lab tests can be very subjective, especially lab tests whose outcome may prove significant.  Mix in politics and you’re better off throwing the results out the window.

At any rate lab tests generally should rest within the context of the history and physical exam.

Well, there you have it:  another pillar falls.

Thank you very much.

The following graphs are from worldometers.info.  The picture of Rita Wilson is obviously from her Twitter account. 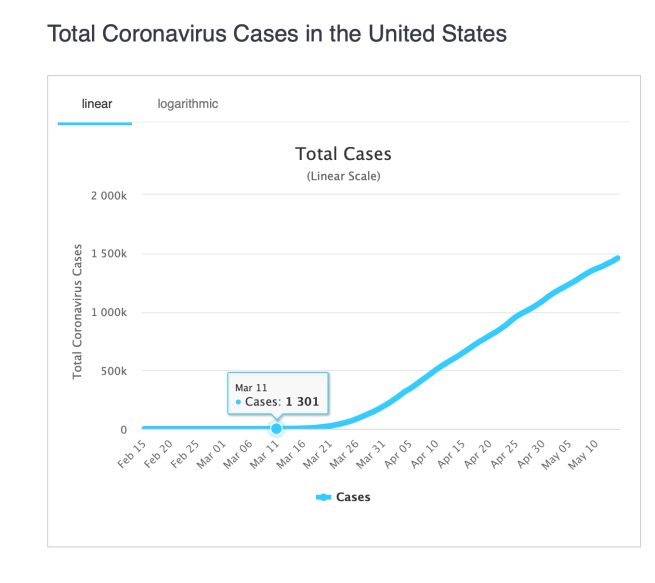 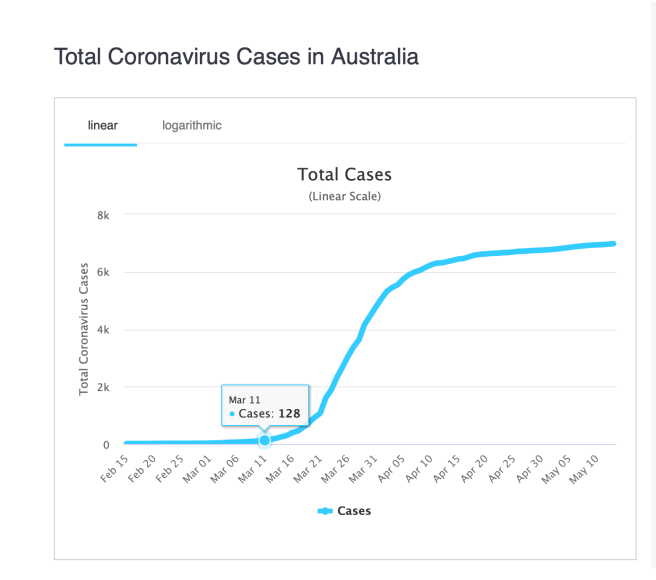 Did you like the column? How about a buck? Thanks much.

Whenever I hear the word democracy, I know that a bloodbath is coming.